A few months ago, I provided a quick analysis of DCPS NAEP scores under Michelle Rhee. Having looked into the fine details, I believe that I underestimated the positive trend in DCPS reading scores during the 2007-2011 period.

NAEP has long dealt with a tricky issue with varying inclusion rates for special education and English language learners between jurisdictions. In 2011, the NAEP adopted inclusion rate standards for ELL and SD students, and notified readers of jurisdictions that violated those standards in an appendix.

Some states and jurisdictions had far more successful efforts to comply with these efforts than others. As you can see from the figure below, DC would have been far out of compliance with these standards (had they been in place) during the 1990s and (especially) in 2007. In 2007, DCPS had excluded nearly three times as many students as permissible under the 2011 standards. 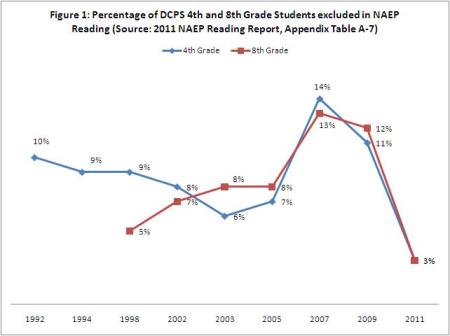 So in 2007, DCPS officials excluded 14% of students from 4th Grade NAEP testing, and in 2011 that figure fell to 3% (the inclusion for all students standard in 2011 was 95%). In 2007, DCPS stood far out of compliance, but came well within compliance in 2011. This is all well and fine, other than the fact that it complicates our ability to assess the recent history of DC NAEP gains.

In order to get a clearer picture on this, I decided to run 4th Grade NAEP scores for students outside of ELL or special education programs. This should minimize the impact of inclusion policy changes. Examined in this fashion, you get the following results:

Recall that the unadjusted total scores for 4th grade reading jumped from 197 in 2007 to 202 in 2009 but dropped back a point to 201 in 2011. That is a four point gain in four years, which ranks in meh territory. Given Figure 1 above, I am not exactly inclined to trust those scores, and in fact out second table tells quite a different story: general education students in DC made a 10 point gain between 2007 and 2011 on 4th grade reading. Ten points approximately equals a grade level worth of progress, so it is fair to say that DCPS general education 4th graders were reading approximately as well as 2007 general education 5th graders. Ten points ranks as the largest reading gain in the nation during this period for these students. Mind you, a 209 score for non-Ell and non-special ed students is still terribly low. Only gains will get DC out of the cellar, however, and DC banked solid gains during this period.

If you combine 4th and 8th grade reading gains for general education students, and only look at Free and Reduced lunch eligible students for a bit of socio-economic apples to apples, here is what you find:

This entry was posted on Thursday, January 12th, 2012 at 6:54 pm and is filed under NAEP. You can follow any responses to this entry through the RSS 2.0 feed. You can leave a response, or trackback from your own site.

21 Responses to A Closer Look at DC NAEP Scores