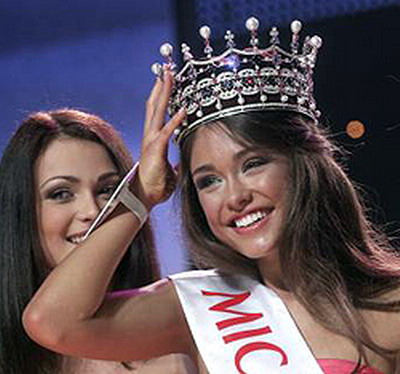 In a provocative (as in thought-provocative) post, Neal reviews what the Miss USA [oops] contestants have to say about teaching creation and evolution in schools:

I didn’t tally their responses, but just listening to the contenders it seems their consensus answer represents America in microcosm: Most seem to have serious doubts about evolution, but support teaching it along with other viewpoints. It reflects both the overall split within the American public—40 to 50 percent of Americans are creationists, and roughly the same segment evolutionists—as well as the consensus view on teaching human origins: About 60 percent of Americans support teaching both evolution and creationism in public schools…

The extent of the evidence is that government schooling generally can’t handle controversy, but that is almost never even mentioned in the seemingly endless war between creationists and evolutionists. And the same is true for the aspiring Miss USAs. While a few appeared to conclude that the nation is too diverse for public schools to deal with this topic—see Miss Kentucky at the 5:07 mark, and Miss Utah at 12:36—the majority made no mention of the problem.

One contestant said “I think we should leave that up to the government.” Maybe she could get a job teaching in this school: 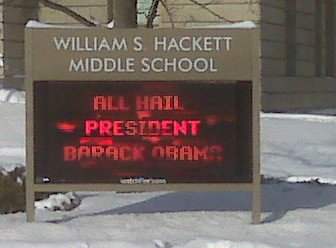 Reading Neal’s insightful post brought me back to a subject that I promised him a few months ago I would treat when I had the chance. Neal and I agree that a government school monopoly can’t handle controversial issues and harms the national culture by undermining pluralism – real pluralism, not the phony kind you get by indoctrinating everyone’s children in a uniform (and politicized) ideology of what pluralism means.

Back during the late unpleasantness over national standards, I wrote that government monopolization of schooling is one of the root causes of the culture war, but (I said) “that’s an argument for another day.” Neal objected:

Here’s where I think Greg is incorrect: Choice is not an argument for another day. It is the argument for this day.

Until all parents have real, full choice they will have no option but to demand that higher levels of government force intractable lower levels to provide good education. It won’t work — thanks to concentrated benefits and diffuse costs all levels of government are dominated by teachers’ unions and administrators’ associations that will never let tough accountability and high standards rein – but it is all that parents can do absent the ability to take their children, and tax dollars, somewhere else. That means choice is essential right now, because it is the only way to take power away from special-interest dominated government and give it to the people the schools are supposed to serve. In other words, it is the only option that will actually work, obliterating the special-interest hammerlock, imposing accountability to customers, and when coupled with freedom for educators unleashing competition, specialization, innovation, and constant upward pressure on standards. In other words, it will do all those things that national standardizers emptily and illogically promise that their reform will do, and much, much more.

I promised him a response and never got around to it. This looks like the time.

Time is actually the basis of my response. I’m more or less with Neal on all the substance here. But getting the reforms we want requires us to participate in a social process that takes place within institutions and relationships, and which therefore has to unfold over time.

It seems to me that some people in the school choice movement (Cateaux!) have fallen into the trap of thinking that a successful movement for reform looks like this:

This reflects, I think, too much emphasis on the cognitive – as though there were a Platonic Form of Education Policy and our job is to contemplate it until we grasp its unchanging eternal nature, then subdue the world of time and change until it matches the eternal unchanging Form. In this Platonic dualism, the changeless and eternal (in  this case, the perfect education policy blueprint) is the only thing we value for its own sake, and the world of time and change is valued only as raw material for constructing tangible manifestations of the intangible Forms.

Neal’s insistence that all issues must be settled right now reminds me of a scene from C.S. Lewis’s The Great Divorce, which is a book that really reflects the Platonic view (especially as channeled through Augustine, who took Plato mainstream). In the book, Lewis describes a dream in which he sees people’s entire lives distilled down to a single moment of choice between good and evil.

In one scene, a Bright Spirit offers a man eternal bliss if he will turn away from his evil desires. He keeps making excuses. The Bright Spirit offers to kill his evil desires and he says: “There’s time to discuss that later.” The Bright Spirit replies: “There is no time.” A little later he says, “Some other day, perhaps” and the Bright Spirit replies: “There is no other day. All days are present now.” He demurrs but offers to return later: “I’ll come again the first moment I can.” The Bright Spirit replies: “This moment contains all moments.” This is essentially the Platonic/Augustinian approach to life, death and the afterlife – your life “down below” in the world of time and change was really just the ephemeral expression of a single, trans-temporal choice between good and evil. This view feels transcendent and liberating to people who have a certain highly cognitive bent of mind, but it’s actually reductive and limiting.

Neal’s insistence that we can’t talk about national standards without also talking about school choice feels the same way. We’ll never make progress on any issues if we can’t discuss one issue without simultaneously discussing all the others. Or, to put it another way, we can’t win any battles if we think that they’re all really the same eternal trans-temporal battle, with little manifestations of it fought over and over again within time. Because that way of thinking forces you to isolate yourself from potential allies who may not be interested in your entire blueprint (ahem) but who may be useful coalition partners.

This entry was posted on Tuesday, June 21st, 2011 at 9:53 am and is filed under civic values. You can follow any responses to this entry through the RSS 2.0 feed. You can leave a response, or trackback from your own site.