Pass the Popcorn: City of the Dark Knight (Issue #3)

We’re now on our fourth issue of the series and we haven’t said anything yet about Heath Ledger. That was intentional, for three reasons.

First and most important, there’s not much interesting to say, or at least not that I can say. It’s obviously a virtuoso performance, and would have been a career-making breakthrough. Ledger was clearly one of the most talented performers of his generation, and it’s a shame he never reached his potential until the end of his abbreviated career.

Beyond that, what’s to say? If I were in the acting business, I could no doubt analyze the performance and say more about what makes it great. But I lack even the rudamentary ability to do so, and I’m not interested in bluffing.

Second, too much of the chatter about Ledger and this performance is shallow and feels exploitative of his death, and I don’t want to contribute to that.

And third, I think Ledger’s masterpiece contribution is overshadowing other contributions. I don’t want to take away any of the honor Ledger has justly earned, but for this movie to be what it is, a whole lot of people had to turn in top-flight performances.

Back in Issue 1, commenter Captain Napalm mentioned Aaron Eckhart and Gary Oldman – both of whom were indeed outstanding. I’ve just praised Morgan Freeman in Issue 2, and Michael Caine’s contribution shouldn’t be overlooked – one of the most important differences between a good film and a great one is that all the little things are done right, as well as the big ones. Caine and Freeman didn’t get the big drama, but they delivered fantastic little gems – “We burned down the forest” is one of the most memorable moments in the movie. So is “You have no idea.”

Everyone – by which I mean the handful of movie geeks whom I personally know – seems to agree that Christian Bale had essentially nothing to do in this movie. The first movie was about Batman, not the villains, so the villains were (as I mentioned last time) unmemorable. This movie was about the Joker, so Batman was unmemorable. But serving as the Joker’s foil is something. The Joker carries the movie, but he can’t do that if Christian Bale doesn’t act well his part, wherein all honor lies. Imagine this movie with Ledger playing opposite George Clooney – or even Michael Keaton, who I thought did surprisingly well as Tim Burton’s Batman, but would have been totally inappropriate as Chris Nolan’s. (And let’s also acknowledge that “I’m not wearing hockey pants” was well delivered.)

And naturally we should be crediting Chris Nolan. Having done a little amateur acting, I know how much a director contributes to an actor’s performance – or doesn’t. When any six actors, even six really good ones, all deliver a top-notch ensemble performance, it’s as much the director’s work as theirs.

Above all, though, we should be thanking the writers. Think about every scene you remember of Ledger. Isn’t it the brilliant lines as much as the brilliant performance that make this movie so amazing? “When you think about it, I knew your friends better than you did. Would you like to know which of them were cowards?” That’s really brave writing. And of course, all those clever one-liners we’ve been taking notice of in this and previous issues had to come out of somebody’s keyboard before they could come out of Morgan Freeman, Michael Caine, etc.

You do know who wrote the movie, don’t you?

Chris Nolan shares the screenplay credit with his brother Jonathan Nolan, and shares the story credit with David Goyer. The Nolan brothers also co-wrote Memento and The Prestige (which came out between Batmans). Goyer has a long track record on comic book movies that includes Blade and co-writing Batman Begins with Chris Nolan, as well as sole story credit on Batman Begins. And of course Frank Miller should get a nod for his influence.

All that said, Ledger did pull off an amazing feat. In addition to what’s on the screen, consider how much prior baggage he had to overcome with the Joker character: 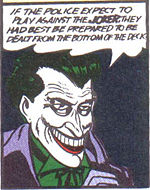 The Clown Prince of Crime

The Ultimate Psychopath: “Whatever’s in him rattles as it leaves.”

The Outer Edge of Insanity

A lot of people thought no one could play the Joker after Nicholson, particularly not the star of A Knight’s Tale. Nicholson himself, for one. He said as much, as The Dark Knight was approaching release. I wonder if he repented after he saw the performance.

This entry was posted on Friday, August 8th, 2008 at 11:11 pm and is filed under Pass the Popcorn. You can follow any responses to this entry through the RSS 2.0 feed. You can leave a response, or trackback from your own site.

7 Responses to Pass the Popcorn: City of the Dark Knight (Issue #3)