Pass the Popcorn: City of the Dark Knight (Issue #2)

Okay, and now for something completely different! Today we’re going to talk about Bat Gear.

What was the one thing in The Dark Knight that just didn’t work? So far, everyone I’ve talked to has the same answer, even if you don’t ask them the question – it’s the citywide “sonar.” Lame.

The first time through, it was really obtrusive – for a few minutes. One of the greatest innovations in storytelling in the last ten years is that movie and TV people have learned the value of throwing a lot of story at you and trusting you to keep up; among many other virtues, this means badly done moments in the narrative get left behind more quickly.

The second time through, I didn’t really mind. That was partly because dumb plot elements are always less obtrusive the second time around, because you aren’t being hit with the shock of recognizing their stupidity. This, for example, is why it is possible to watch the Lord of the Rings movies repeatedly without their being spoiled by a bunch of friggin’ elves marching into Helm’s Deep, or the army of the dead effortlessly wiping out the beseiging force at Minas Tirith (which means all those Rohirrim who gave their lives on the Pelannor died for nothing).

But it was also partly because the second time I saw how it was supposed to fit into the movie. Somehow, the first time through, I totally missed the “like a submarine” gag. You remember, when Lucius comes out of the evil corporation’s building in Hong Kong and shows Bruce the sonar readout:

It just flew by and I missed it completely. (How am I supposed to catch all these little things when they throw so much at you and expect you to keep up with it all?)

Obviously they were thinking that we would buy the “sonar” because sonar fits with the bat theme. And it’s not a crazy theory. When a plot element fits the theme of the movie, artistic liberties with reality are much less obtrusive (a subject I’ve had occasion to discuss at greater length before).

But it didn’t work. And that got me thinking about the gadgets in this movie. F’rinstance, does the Bat Cycle (apparently to make it seem less fruity they’re telling us to call it a Bat Pod) belong in this movie? I mean, honestly – doesn’t it just look like the suits in the marketing department demanded that they throw in something new that would sell toys? After all, the twelve year old boys of America – who should never be permitted to see this movie under any circumstances whatsoever – are not going to shell out for another Batmobile unless it’s different from the last one.

He’s prob’ly fighting for freedom! Buy all our playsets and toys!

And the skyscraper-assault gadgets (in the Hong Kong scene and again in the assault on Fortress Joker) feel artificial, too.

But that’s not what you’d expect, is it? Gadgets belong in a Batman movie. They’re an integral part of the franchise – even more so than in the James Bond franchise.

Consider the first Batman movie – well, okay, not absolutely the first, but the first one that counts. The Tim Burton one. (The Tim Burton one that counts.) That movie doesn’t get its propers anymore, in large part because we now take for granted so much of what Burton did to define the modern comic book movie. Much of what was radical in Burton’s Batman is now so expected that it’s not even noticed.

It was a much more uneven movie than Nolan’s Batmans are – parts just didn’t work, but parts worked brilliantly. And that movie was just brimming with gadgets. The Batmobile actually did stuff – and no, going really fast and changing the driver position from Standard Seated Position to Lying Down for No Reason Position doesn’t count as doing something. Yes, okay, in the first Nolan movie the Batmobile jumped rooftops. But Burton’s Batmobile did so much more. And Batman himself used gadgets more often and it felt more natural. One of those brilliant moments that really worked was when Batman swooped in, foiled one of the Joker’s plans, and swooped out on one of his flying wires (or something) and the Joker was just so impressed that he didn’t even think about how badly he’d been beaten – he just stood there and asked: “Where does he get those marvellous toys?”

Or consider what must be the best gag ever done in a comic – from the Batman/Planetary crossover.

Anyway, the Planetary crew are in Gotham chasing a man whose mind keeps opening dimensional rifts, and of course they run into Batman, who of course is chasing the same guy. But every time the guy opens a dimensional rift, they shift to an alternate reality where Batman is slightly different: 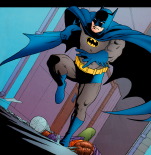 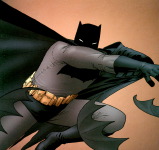 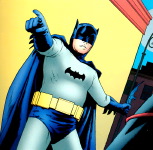 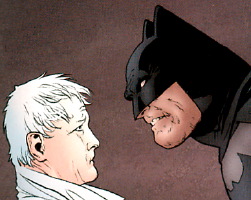 HT Planetary. How many can you identify? How many will you admit you can identify? (No fair peeking at the URLs!)

Here’s the gadget gag: Jakita Wagner, a superpowered female hero, is about to throw down with one of the badass Batmans. Then a rift opens and suddenly it’s not a badass Batman, it’s the Adam West Batman from the supercamp sixties TV show. And . . . he would never hit a girl!

So when she rushes him, he avoids compromising his honor by whipping a spray can out of his utility belt and dousing her in the face. (I always suspected the Adam West Batman was really a sucker-punching bastard.) She falls back, clutching her eyes, and Batman drops the can and springs away to chase after the rift-opening guy. As she curses him, we see the can roll into the frame.

The label on the can reads: Bat Female Villain Repellent.

I swear I Googled for probably half an hour looking for that panel, so I could share it with you. I guess you’ll have to buy the crossover instead.

But back to our subject. Gadgets not only belong in Batman, they ought to belong in Chris Nolan’s Batman. After all, this is the first movie version to include Batman’s “Q”, and he’s used to outstanding effect in both movies. What are the most memorable moments in the first movie? Liam Neeson blathering on about destroying Gotham? Dr. Crane attacking people with his fear drug? No, that movie had some of the least interesting villains ever to appear in a comic book movie. (Not a criticism – that movie was about Batman, not about them.) What you remember is: “Oh, the tumbler? You wouldn’t be interested in that.” And: “Just don’t think of me as an idiot.”

And Chris Nolan clearly knows how to get the best out of Morgan Freeman, because he’s used just as well in the new one. That “your plan is to blackmail this person?” speech is priceless.

Come to think of it, in the first movie Batman used a “bat caller” gadget to produce a swarm of bats where he needed it. It was ridiculous, of course – but it fit the theme of the movie, especially in that it was trying to explain why Bruce Wayne chose to dress up like a bat when fighting crime. Being attacked by a swarm of bats would tend to put the fear in you.

So why didn’t the gadets work in this one? The first thought to occur to me was that they were trying to force the citywide sonar to perform an awkward plot function – they wanted to abruptly set up a little mini-debate between Batman and Lucius on the whether it’s OK to spy on the whole city. But frankly, I don’t really think that’s it. I think citywide sonar would have failed even without that scene. (Speaking of which, when I first saw it, I thought that Lucius’s position was “This is wrong, but I’ll do it just this once,” which of course is a contemptable position. But that’s not what he says, as I discovered upon seeing the scene a second time. I think his position is really “This is OK as a one-time deal, but it would be wrong to use it on an ongoing basis.” I’m inclined to think that if it’s OK as a one-time deal, it’s hard to justify throwing it away, especially in a city that seems to attract supervillains like a magnet – but it’s not a contemptable position.)

Maybe – and I’m not sure about this – maybe it’s just that they obviously could have accomplished the same thing with less tampering with reality. Batman could have simply set up a computer to scan all phones for the Joker’s voice. And they could still have worked in the bat/sonar theme by equipping the Batsuit with its own sonar, which he could then have used in the Assault on Fortress Joker scene.

(Oh, and I’m still hoping somebody can help me with the tally on Dent’s body count. I’m one cop short.)

This entry was posted on Sunday, August 3rd, 2008 at 11:19 pm and is filed under Pass the Popcorn. You can follow any responses to this entry through the RSS 2.0 feed. You can leave a response, or trackback from your own site.

2 Responses to Pass the Popcorn: City of the Dark Knight (Issue #2)