For the Higgy: Bruce Aylward 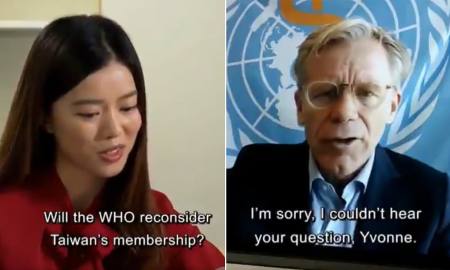 For this year’s Higgy, in the spirit of previous Higgy winner Pascal Monnet and Al winner Pete DeComo, I had been planning to nominate the culprits in this story. It was initially reported that volunteers were being sued by a medical device manufacturer because, to keep breathers at a hospital in Italy working (and thus patients alive) under emergency conditions where there were no other options, they used $1 of materials to 3-D print replacements for valves that normally cost $11,000. But the story fell apart when the reporters followed up.

I was glad that it turned out the company had not in fact sued, or even threatened to sue, the volunteers. But I’ll admit I was also a little disappointed. I wondered whether I could possibly find another Higgy nomination as good as that one would have been.

I needn’t have worried!

Aylward: No, that’s okay, let’s move to another one then.

Tong: I’m actually curious in talking about Taiwan as well, on Taiwan’s case…

Aylward: [Leans forward and looks down at his keyboard, as if searching for the Escape key]

[Tong calls him back]

Tong: I just want to see if you can comment a bit on how Taiwan has done so far in terms of containing the virus.

Aylward: Well, we’ve already talked about China. And you know, when you look across all the different areas of China, they’ve actually all done quite a good job. So with that, I’d like to thank you very much for inviting us to participate, and good luck as you go forward with the battle in Hong Kong.

Here’s the original source, but thanks to the magic of YouTube, you can watch the whole thing in all its majestic glory right here, without even leaving the comfort of your own JPGB. And really, you must watch it to appreciate it in full:

Now, don’t cry “BSDD!” until you hear the punchline.

Punchline? You mean this story gets better? You bet your Escape key it gets better. In fact, the more you know about this story, the better it gets.

For instance: Five days before he became a global laughingstock, Aylward gave an interview to Time in which he said we need to look not only at “places that are recently getting infected [and] places that aren’t infected” but especially at “the places where it all started.” He then immediately mentioned “Europe, North America, the Middle East.”

For instance: The day after he became a global laughingstock, Aylward was still telling Canadian television that China was one of the few countries that had contained the virus. Why learn lessons from your experience when you can just keep charging mule-headedly forward along the same path? What would become of the grand project of a centrally planned society, which is our only hope of salvation, if we learned lessons from experience? (What’s the definition of insanity, again?)

For instance: On March 4, the New York Times ran an interview in which Aylward not only praised the Beijing regime’s handling of the crisis, but said that the number of cases had already peaked in China. The number of people asking for tests daily declined from 46,000 to 13,000. “Hospitals had empty beds.” On March 4.

The Times managed to rouse itself to ask, of the supposedly stellar job the Beijing regime was doing, “isn’t it possible only because China is an autocracy?” Which shows a lot of credulity in accepting the claims about the regime’s performance at face value, as well as an unconscious admiration for autocratic regimes. Thankfully, Aylward was on hand to assure the Times that the Beijing government is not “some evil fire-breathing regime that eats babies.”

The reference to eating babies is especially rich. And in case you wondered, yes, there is a connection between the millions of murdered babies in China’s past and the two million Uighurs awaiting execution in concentration camps in its present. The connection is this.

Headline of Aylward’s Times interview: “Inside China’s All-Out War on the Coronavirus.”

Appropos of absolutely nothing, I will choose this moment to note that the Times’ statement on Walter Duranty admits frankly that his reporting was a pack of lies designed to whitewash communist mass murder, but it does not contain an apology. The Times also primly notes that the Pulitzer committee has repeatedly declined to withdraw the award, and links prominently to the Pulitzer committee’s statement – which, with titanically inhuman irony, actually absolves Duranty of lying. I can’t decide which is worse.

So at this point you’re all yelling “BSDD!” Right?

For one thing, Aylward’s not making policy. He only has “arrogant delusions of shaping the world.”

For another, it hardly counts as BSDD to help keep Taiwan out of the WHO when Taiwan is actually far better off outside the WHO than in it! They have the spirit of freedom we had when we were a young nation, and seem to be doing just fine without the WHO’s help. They’re actually printing their flag on the masks they produce, so anyone (say, on the mainland) who buys them will have to walk around wearing the Taiwanese flag. 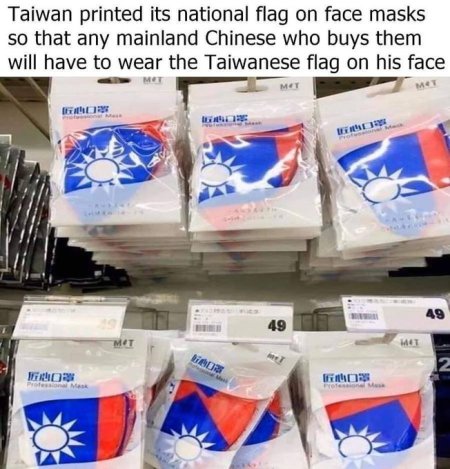 Taiwan is the Tom Doniphon of Asia; the oppressor has more men, and has more guns, and has subverted the legal authorities, and Taiwan just does not give a rat’s ass – not about the oppressor’s bullying swagger, and not about hoity-toity, pointy-headed “civilized” people who talk about peace and justice but disappear when the oppressor walks into the room.

And we’re better off with Taiwan out of the WHO, too. On January 14, WHO parroted Beijing’s claim that there had been no human transmission of the virus, but Taiwan was openly telling the world otherwise as early as December 31. We’re the suckers, for listening to the WHO instead of Taiwan.

But that’s not the best part.

Punchline: Just hours after the exchange with Tong was posted, his employers at the WHO panicked and deleted Aylward from their website.

Bruce who? Bruce WHO? We’re the WHO, and we’ve never heard of him!

You’ll be reassured to know that Aylward is back on the WHO website, and the WHO has issued a statement responding to Tong’s questions. Determining how much credibility the WHO’s answers have is left to the reader as an exercise. But I do believe we can trust the message that they’re sending loud and clear when they decline to say whether Aylward hung up on Tong.

The bloodthirsty tyrants of Beijing are BSDD. The WHO, which has submitted to the control of the Beijing regime and spreads its lies, is BSDD.

But this moron freaks out and melts down the moment he’s asked a question he should obviously have been prepared for – he was one of the WHO’s point people for media on China and Coronavirus, and he gave an interview to a Hong Kong journalist, and he wasn’t prepared for this? – and he ends up scrubbed from his employer’s website. That’s PLDD if anything ever was.

In the spirit of earlier Higgy winners who were PLDDers used and discarded by BSDDers – Jonathan “We’ll Get to That Part Later” Gruber, Chris “Get on the Plane and Go Home” Christie and Kosoko “Then It Turned on Him” Jackson – I nominate Bruce “I Couldn’t Hear Your Question” Aylward for 2020 William Higinbotham Inhumanitarian of the Year.

This entry was posted on Friday, April 3rd, 2020 at 8:10 am and is filed under Uncategorized. You can follow any responses to this entry through the RSS 2.0 feed. You can leave a response, or trackback from your own site.

3 Responses to For the Higgy: Bruce Aylward