American Families Rebel Against K-12 Standardization with their Pocketbooks 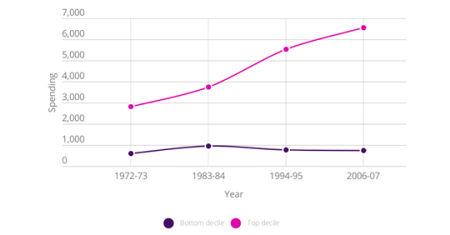 Enrichment- coming in various forms such as tutors, club sports, Kumon, Mathnasium etc. has become increasingly ubiquitous among the posh. It seems entirely normal, but we should recognize the significance of this trend. In addition to the equity issue staring back at you in this chart, there is also something else worth noting in the data: upper-income America continues to put their children into public schools in high numbers but they are solely relying upon those schools less and less. It’s always been the case that all American families should know better than to entirely rely upon any school to provide the totality of the education of their child. Upper income families have the ability and increasing willingness to act. Jay refers to this trend as hybrid homeschooling. I think of it as a better American version of Japanese cram schools.

In places like Japan and South Korea university admission is highly selective and competitive, and families routinely send their children to what are called “cram schools” after their regular school to prepare for admission exams. Andrew Coulson made a convincing case in Market Education that these private after school programs were more responsible for Japan and Korea’s high PISA scores than their public school systems.

To which America says “I see your obsessive preoccupation with standardized test prep mania and raise you a hackerspace for kids!”

If that’s not your child’s cup of tea don’t worry because there are many other options. On the academic side you can get Advanced Placement coursework and textbooks for free, and take the AP exams for a shot at college credit for approximately $85 per course. That however is just academic stuff, albeit academic stuff that can earn you college credit at an amazingly low price- how about something fun like animation camp? Or museum programs? If you go to Cottageclass.com you can find all kinds of stuff- from art, music, wood shop to ethics classes.

The trend towards enrichment may in fact be in part fueled by the overreaching of standardization in public education. Jack Coons and Stephen Sugarman for instance noted in Education by Choice:

To the extent that schools of choice must conform to state imposed curriculum requirements, the principle of family control is compromised. Each centrally imposed curriculum prescription or prohibition tends to shrink the proportion of families that can be satisfied. If the state demands too much the effect will go beyond simply adding or eliminating certain courses; entire schools will be excluded. For example some preexisting private institutions would refuse to participate if sex education were required, others would refuse if it were forbidden. It seems sensible for us for the state to impose very few restrictions or mandates. In general schools should be free to please themselves and their customers.

Coons and Sugarman go on to say that in a choice system we should allow individual public school campuses to decide upon their curriculum as well. Such freedom is far more plausible in a liberal system of choice, and in the absence of that freedom local control was largely abandoned in a largely futile effort to improve outcomes through centralization. In many ways Coons and Sugarman arrived a place similar to John Stuart Mill, who had warned presciently:

All that has been said of the importance of individuality of character, and diversity in opinions and modes of conduct, involves, as of the same unspeakable importance, diversity of education. A general State education is a mere contrivance for moulding people to be exactly like one another: and as the mould in which it casts them is that which pleases the predominant power in the government, whether this be a monarch, a priesthood, an aristocracy, or the majority of the existing generation, in proportion as it is efficient and successful, it establishes a despotism over the mind, leading by natural tendency to one over the body. An education established and controlled by the State should only exist, if it exist at all, as one among many competing experiments, carried on for the purpose of example and stimulus, to keep the others up to a certain standard of excellence.

American families have deep misgivings about the conduct of public schooling, especially the modern practice of standardized testing. We should aspire to a schooling system that is a good deal more than providing test-prep custodial care for the advantaged before they move on to more genuine educational experiences after school. Likewise, the equity issue in the above chart deserves to be addressed but realistically must be addressed within a context of increasingly constrained resources. The trend towards top-down standardization in K-12 has predominated in recent decades and produced too little at too great a cost despite good intentions. It’s time for a more liberal approach that gives opportunities to educators to create schools and educational experiences, and families the opportunity to select among them. The last 40 years has gone mostly wrong, some bold states should see if Mills, Coons and Sugarman had it right.

This entry was posted on Thursday, September 27th, 2018 at 9:44 am and is filed under Education Savings Accounts. You can follow any responses to this entry through the RSS 2.0 feed. You can leave a response, or trackback from your own site.