Eden and Burke on DCPS Fraud

Jayblog readers of a certain tenure may recall the case being made here that outside of the DC Opportunity Scholarship Program and DC charter schools, there was little to celebrate for disadvantaged kids attending DCPS. Over the last decade of available NAEP data, it seemed clear that advantaged students were primarily driving the overall improvement in scores, with DC charters at least showing much larger rates of improvement for disadvantaged students compared to the national average. DCPS, not so much: 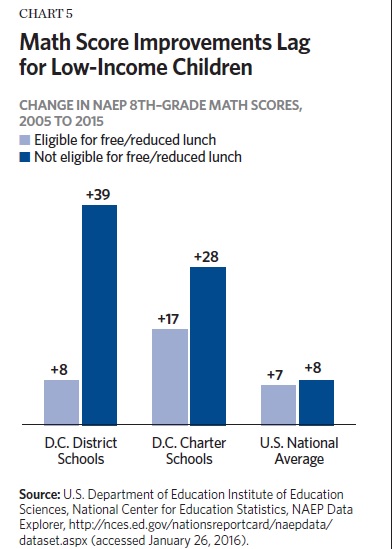 Well it turns out that my view of DCPS as being largely inept outside of educating advantaged kids in carefully guarded pockets of excellence was excessively benign: DCPS also developed a systemic approach to academic fraud.

Prosecutors Eden and Burke hit the pages of National Review yesterday to bring us up to speed on the various forms of metric-driven academic fraud recently uncovered in DCPS. DCPS has been engaging in systemic fraud in order to “improve” graduation rates. DCPS “improved” graduation rates by giving diplomas to huge numbers of ineligible students, and “improved” suspension rates by taking them off the books. The FBI is on the case. It’s not pretty. Money quote from Eden and Burke:

When former D.C. Public Schools chancellor Michelle Rhee assumed leadership, she had a searing critique, and a clear argument: Urban schools were paralyzed by collective-bargaining agreements and inertia, so the best path forward was to have expert-designed systems for a new generation of leaders to implement. The unions, in turn, warned that administrators would weaponize these new systems to force teachers to go along with dishonest schemes that would harm true education reform in the service of posting meaningless numerical improvements.

It turns out both sides had a point.

Meet the new boss, same as the old boss.

This entry was posted on Tuesday, February 13th, 2018 at 8:40 am and is filed under charter schools. You can follow any responses to this entry through the RSS 2.0 feed. You can leave a response, or trackback from your own site.