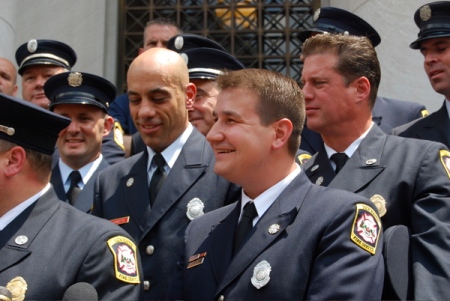 They won their case, but it changes nothing – the administration is now imposing racial quotas that will keep their kids out of AP.

Mike Petrilli has again put on his Pollyanna dress and bought into Hope And Change, praising Obama’s NAACP speech in shockingly hyperbolic terms – “It was transcendent. It was inspirational. It was honest, direct, bold, and, I hope, important, maybe a turning point.”

Look, as has always been the case, Obama says a lot of the right things, and that does matter. But come on, Mike, let’s maintain a grip on reality. Of the descriptors you offer, only “direct” seems plausible. Ask the DC voucher kids how “honest” Obama is being when he poses as a reformer. I’m not sure how you can call him “bold” while simultaneously joining the choruses that endlessly sing his praises everywhere I turn – what would he say if he were a coward? (FWIW, McCain has the exact same issue – he’s a “straight talker” who never tells the public anything it doesn’t love to hear. But that doesn’t excuse Obama.) And while Obama’s choice to talk like a reformer is important, if nothing new emerged in this speech – and it didn’t, unless I’m missing something – then this speech adds nothing “important” to the previously established fact that Obama talks like a reformer. (HT Adam Schaeffer, who got to this party before me.)

As for “maybe a turning point” – only in terms of the channel on my radio.

You know whom you should listen to, Mike? There’s this really great blogger on Flypaper who just did an eye-opening post on the Obama administration’s little-noticed threat to bring race discrimination lawsuits against school districts if they don’t have enough “students of color” in advanced courses. Once the threat has been made, of course, the lawsuit never need be brought – school districts across the country have now recieved the message and will quietly adopt racial quotas to avoid attracting the attention of the people playing with matches near the gas tanks at the DOE’s civil rights office. The threat is the quota.

How does that square with the president’s telling the NAACP that black students shouldn’t use social disadvantages as excuses for slacking in school? What will that do to a couple decades’ worth of work you and Checker and so many others have put into promoting rigorous academic standards against all the charlatanry of the radical left?

If I were you, Mike, I’d start following that blogger’s work on a regular basis. A guy who digs up that kind of shocking story when nobody else found it, and has the guts to broadcast it even if it might get him in trouble with the administration – well, in my book, that’s a guy who’s going places.

This entry was posted on Wednesday, July 22nd, 2009 at 7:32 am and is filed under politics. You can follow any responses to this entry through the RSS 2.0 feed. You can leave a response, or trackback from your own site.